Last Tuesday, after school at around 5.30pm , we rushed to the Singapore Botanic Gardens after hearing from our grandmother (who goes there for her morning walks) that TWO OWLS had been spotted there!
We find owls really hard to find because –
1. You can only find them active at night
2. They camouflage so it’s impossible to see them in the day
– buuut, if you’re lucky, you can see them going to sleep early in the morning or waking up in the late evening!

[author’s sidenote: owls are my favourite birds and I’ve/we’ve only ever seen two of them overseas in Ecuador. Hence I have always wanted to see them in Singapore :D]

When we reached the location of the first owl – a cluster of palm trees – there were already people there with huge cameras set up and trained on the owl’s location. It was quite cramped as the owl was hidden quite deep inside the trees. Moreover, the owl was well-camouflaged and it took the help of some kind photographers (also there to see the owl) before we could spot it.

Note: some of these pictures were taken in the morning when the owl had just landed and was going to sleep. 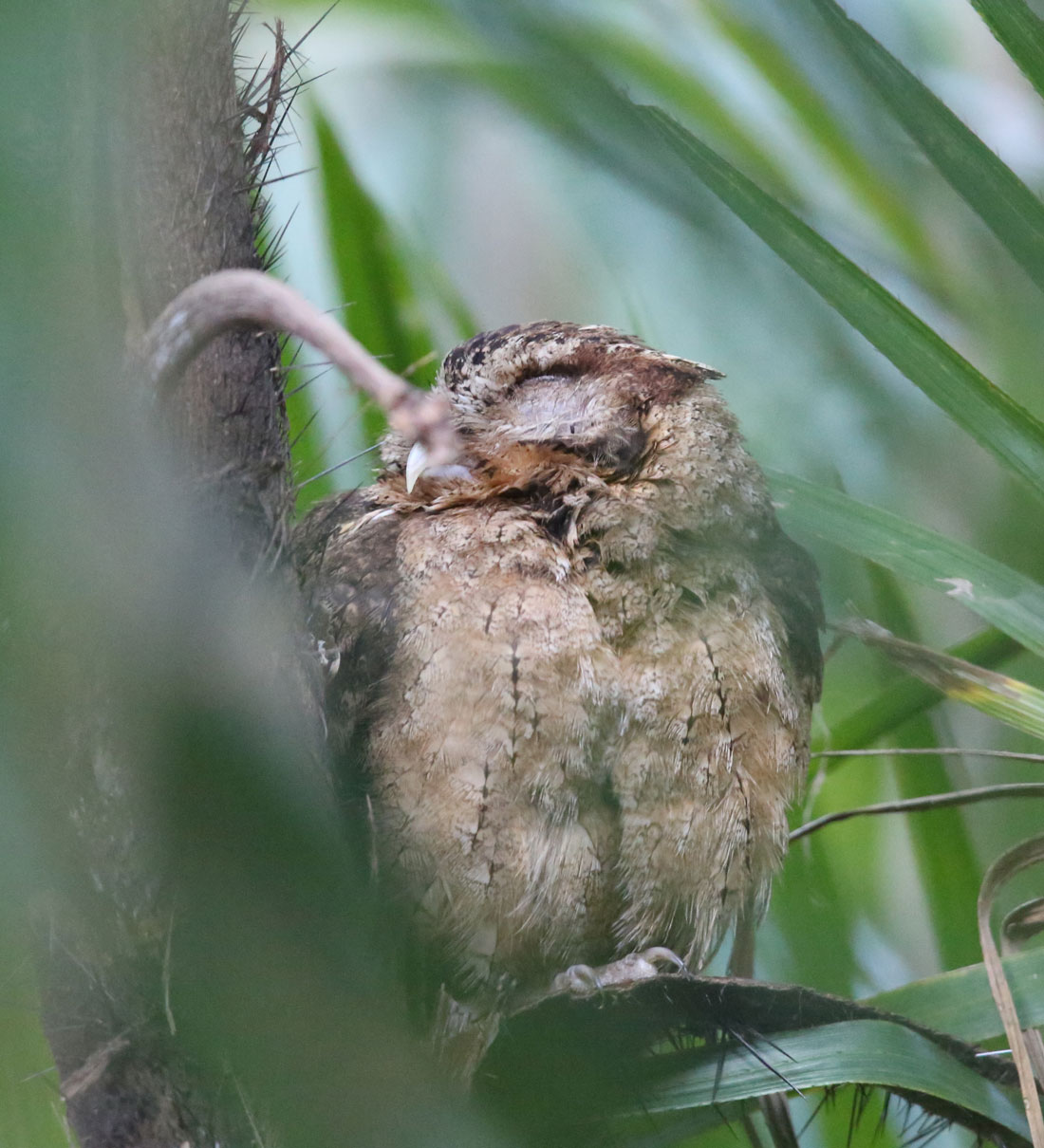 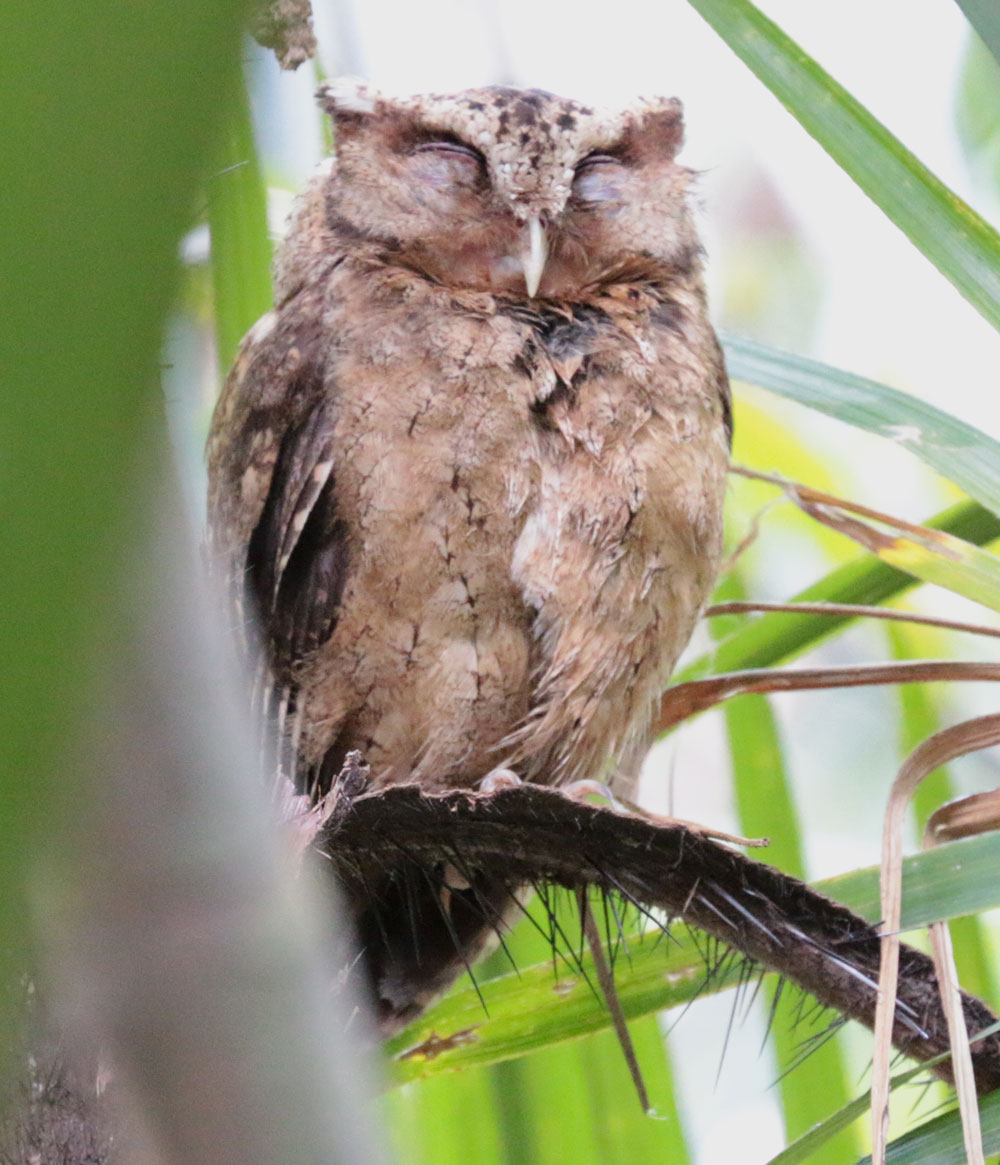 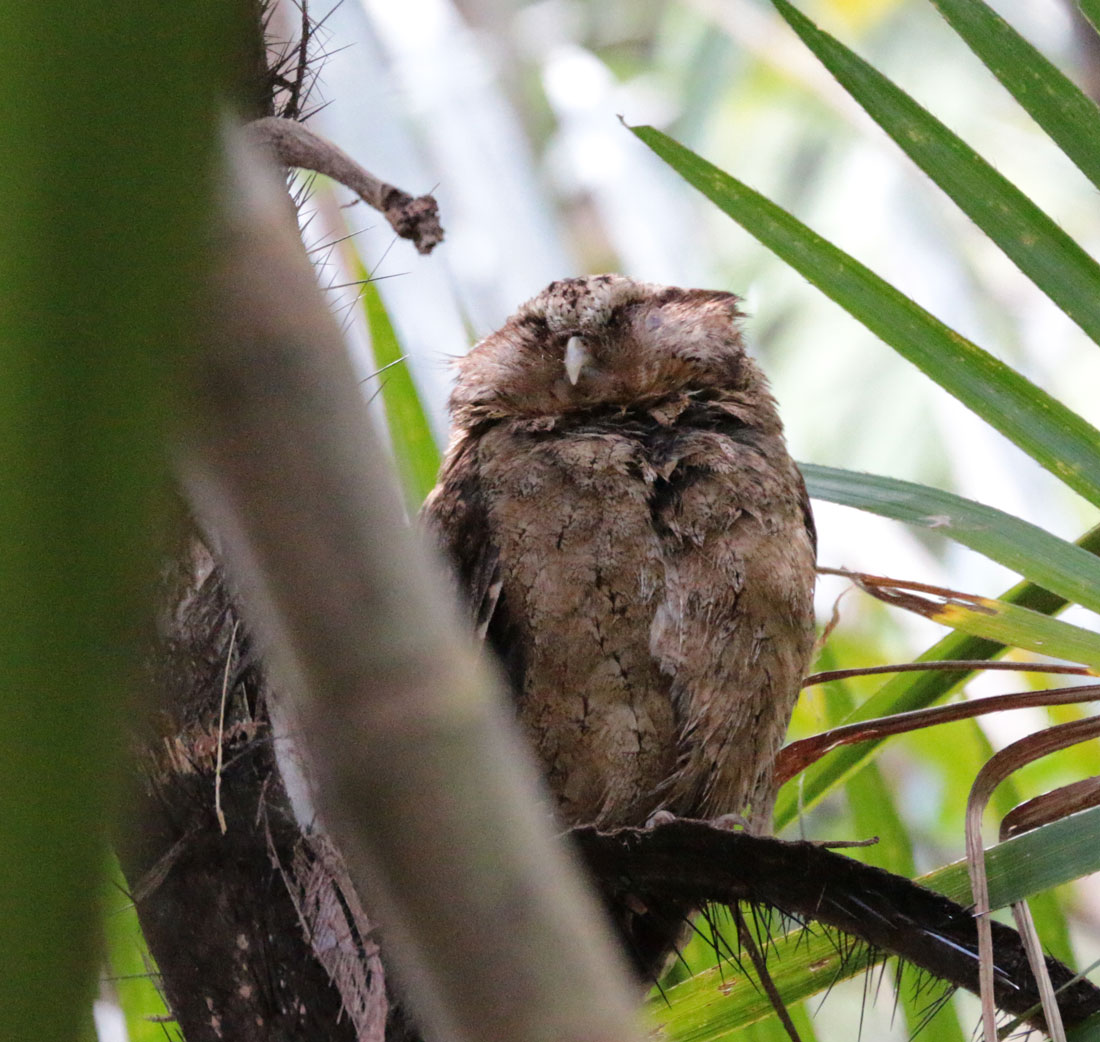 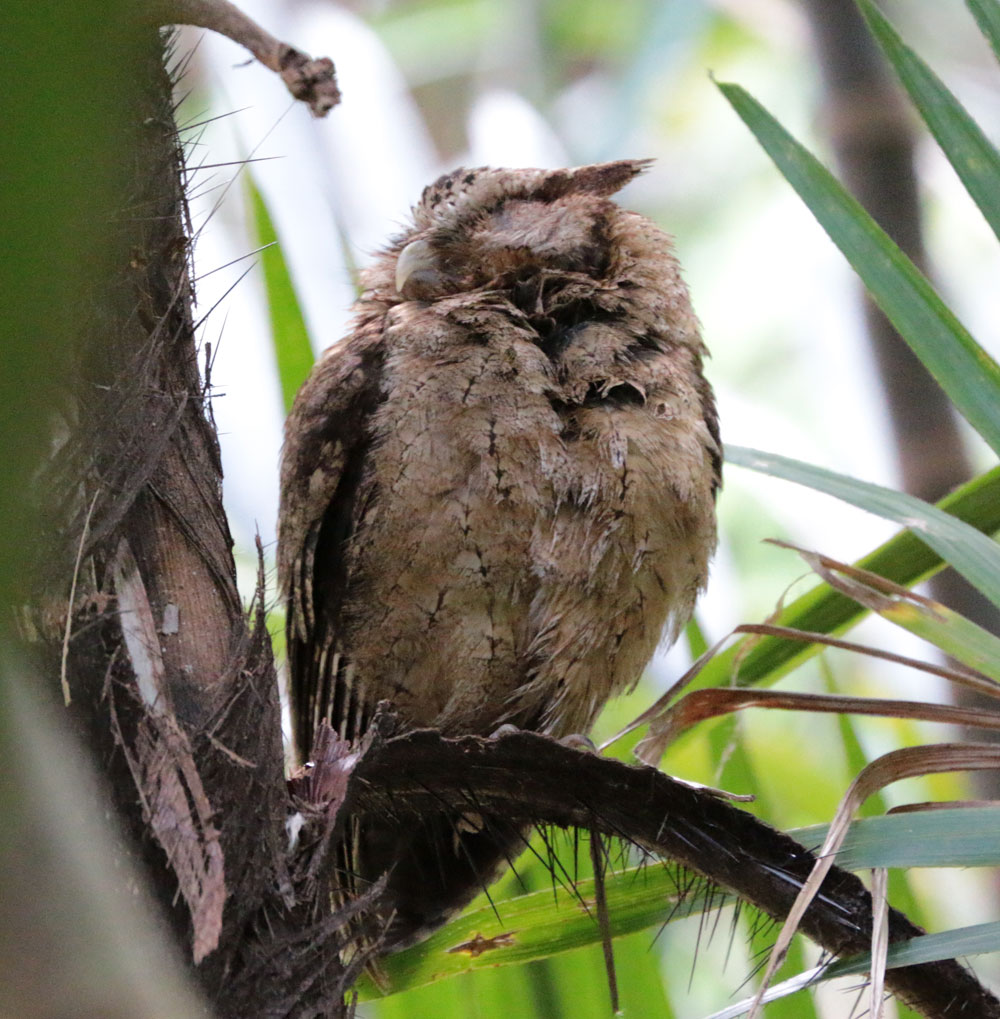 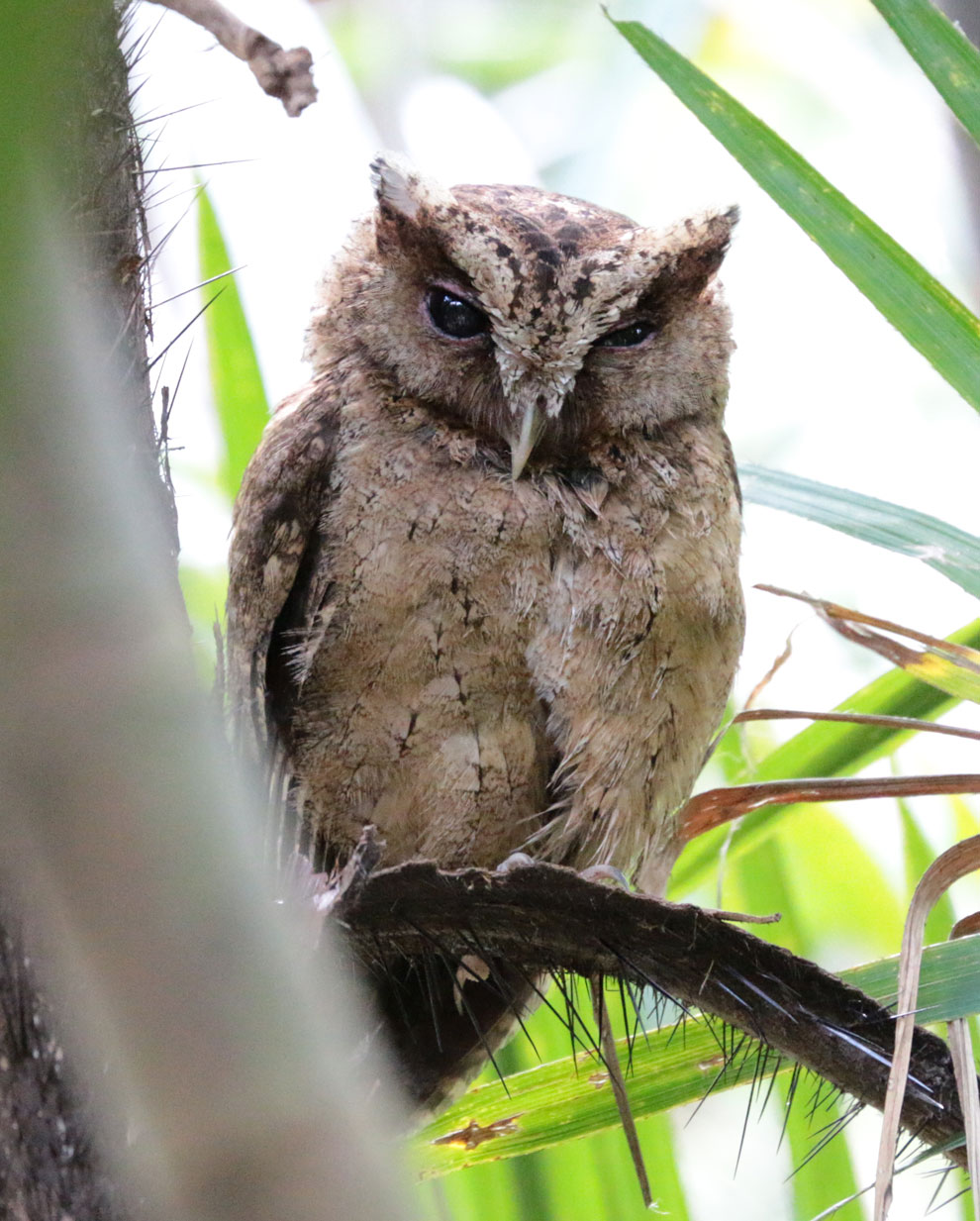 This is actually a Sunda Scops Owl!

Funfact: It’s call is a whooping sound every ten to fifteen seconds.

After deciding we had enough pictures of the owl, we headed towards the rainforest trail, which was where the other owl was spotted. With all the dense leaf coverage, it was much harder to spot this owl, but we managed to see a large silhouette. It was backlit and the owl’s back was facing us, so we didn’t get great pictures.

The pictures below were taken in the morning! c: 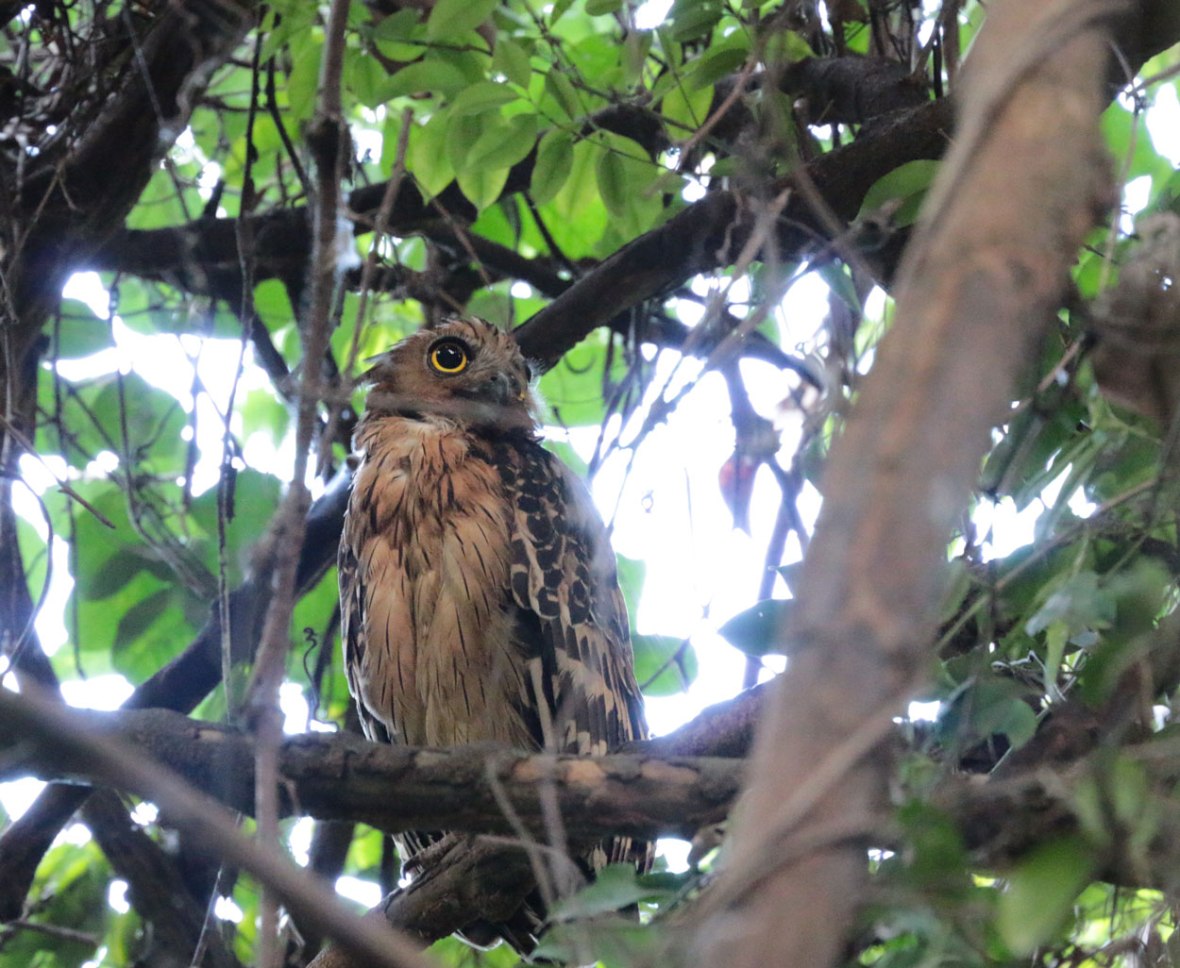 This owl was much more awake than the other owl!! 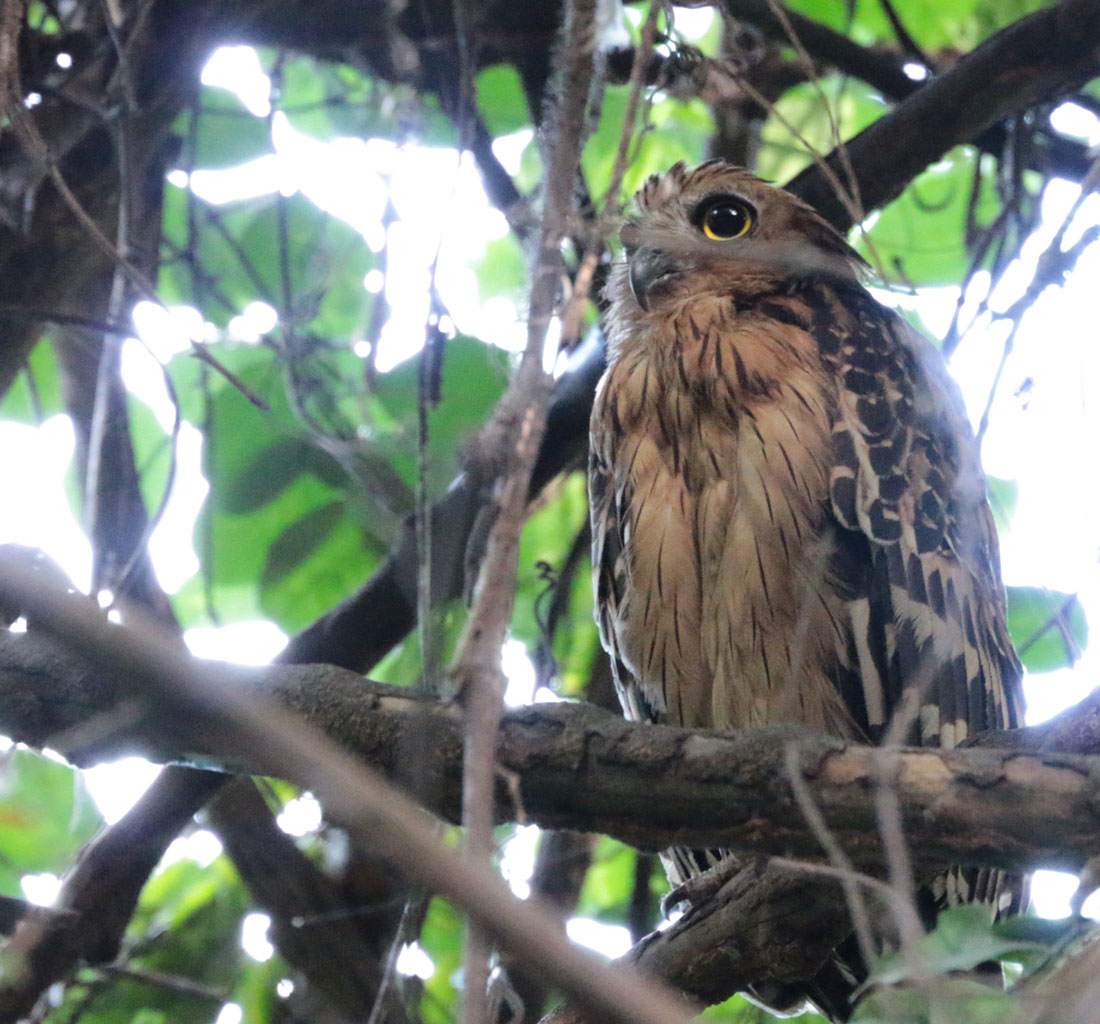 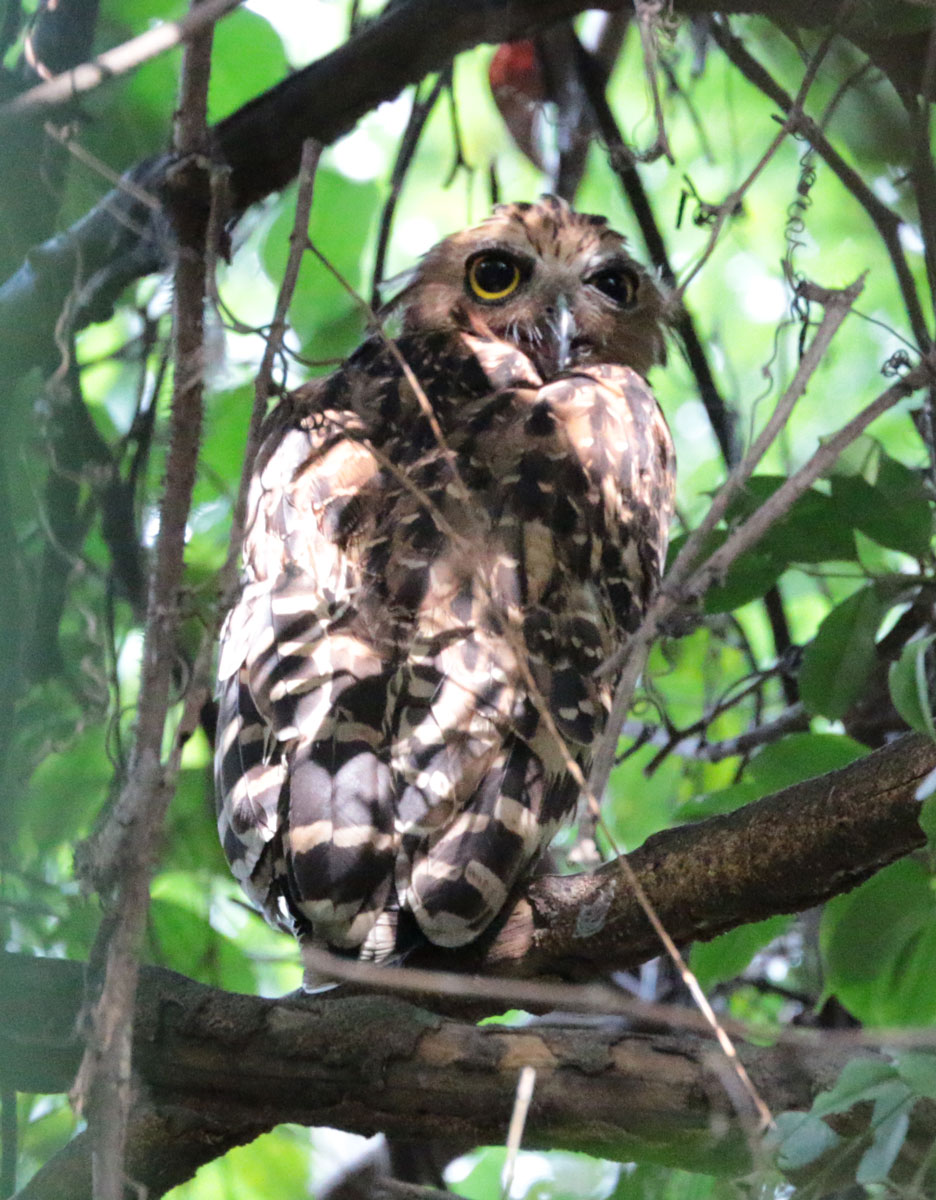 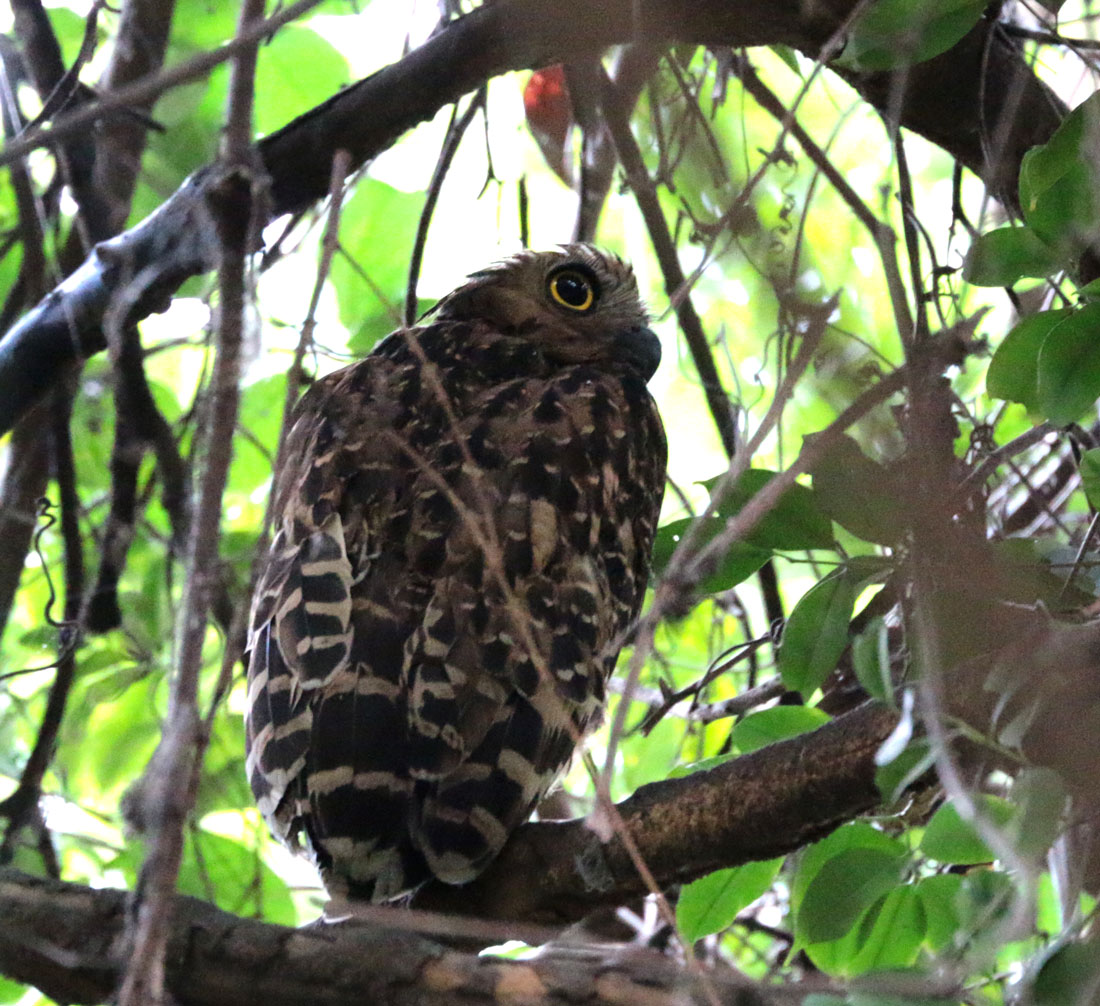 Don’t you think it just looks so adorable ;0; 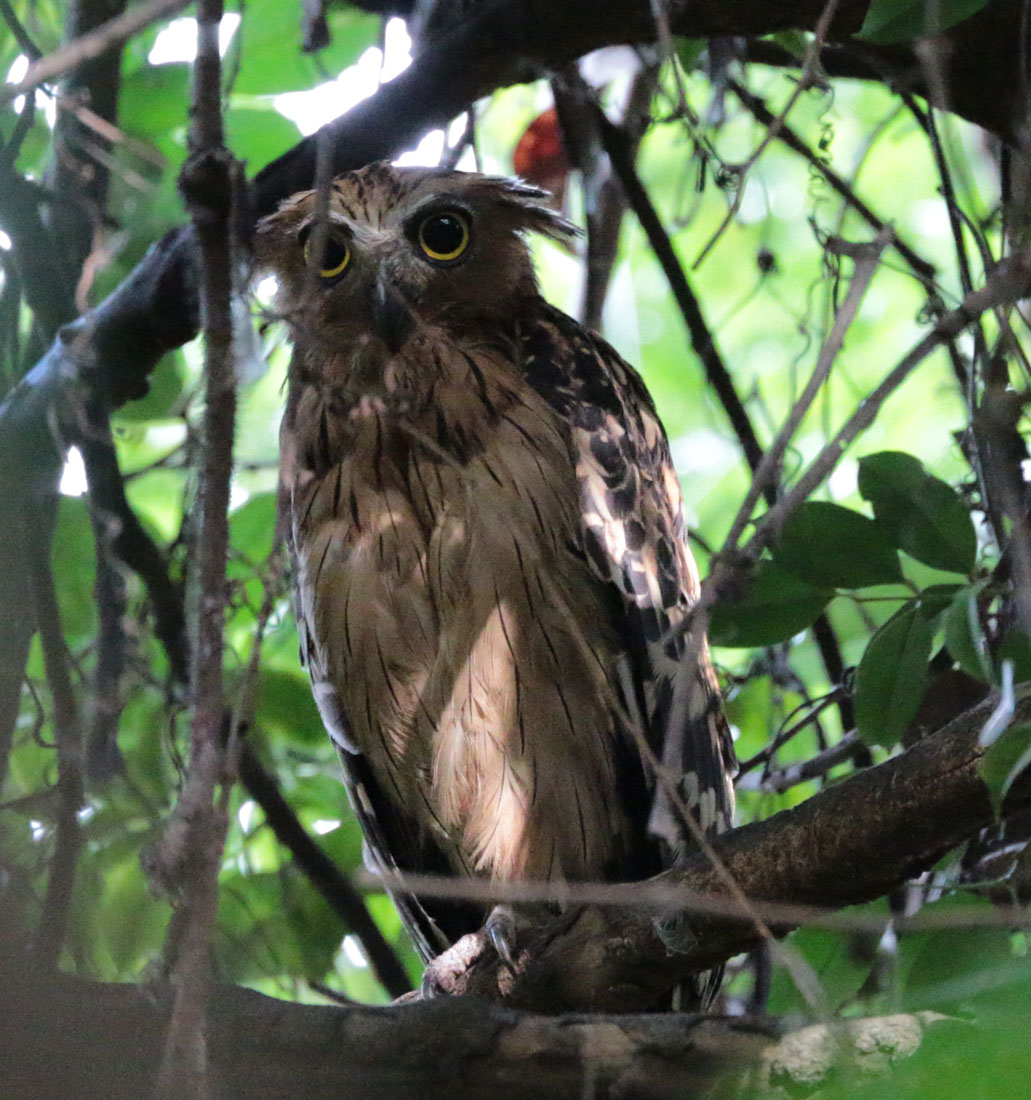 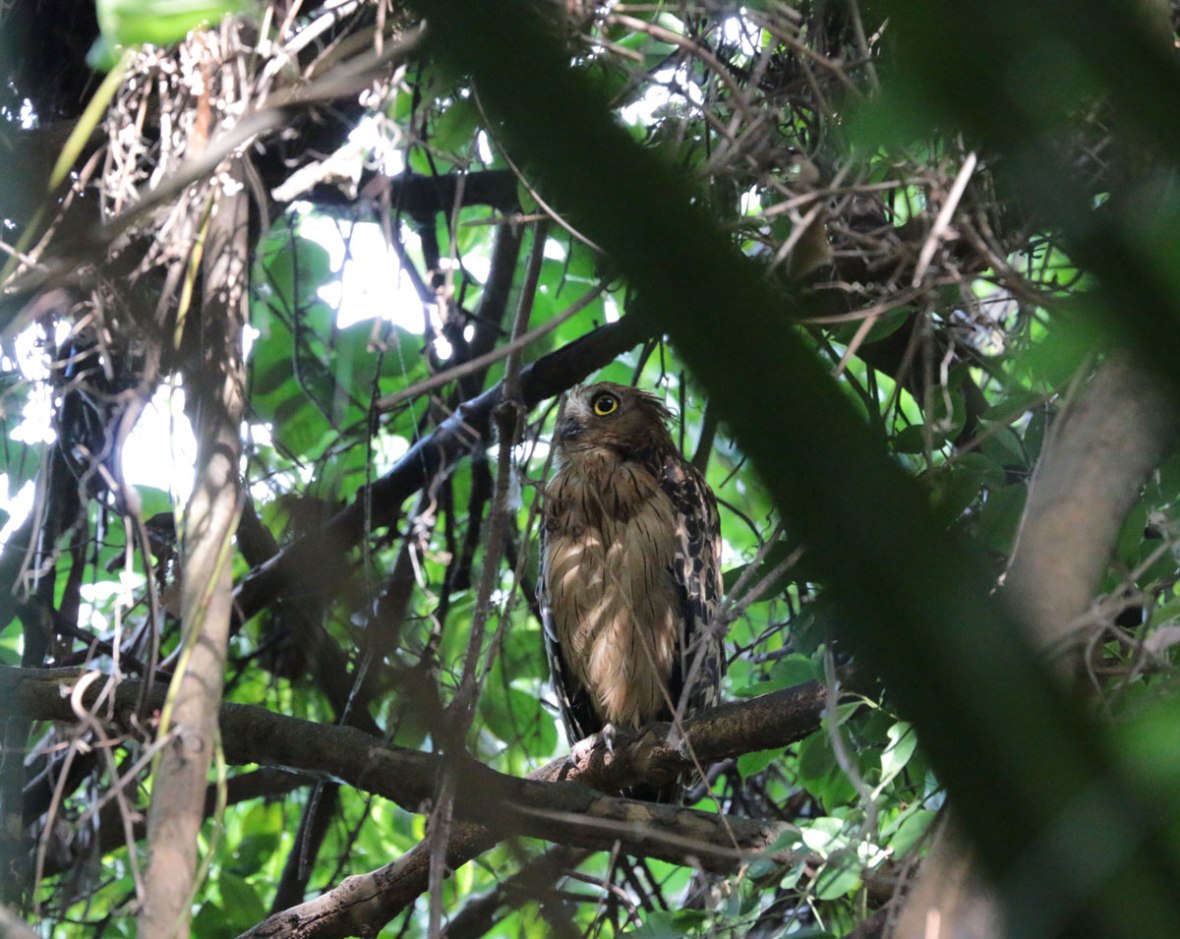 We even managed to catch it with its ear-tufts up!
Owls are commonly mistaken to have ears – in fact, they only have ear holes, and those “ears” are just feathers! 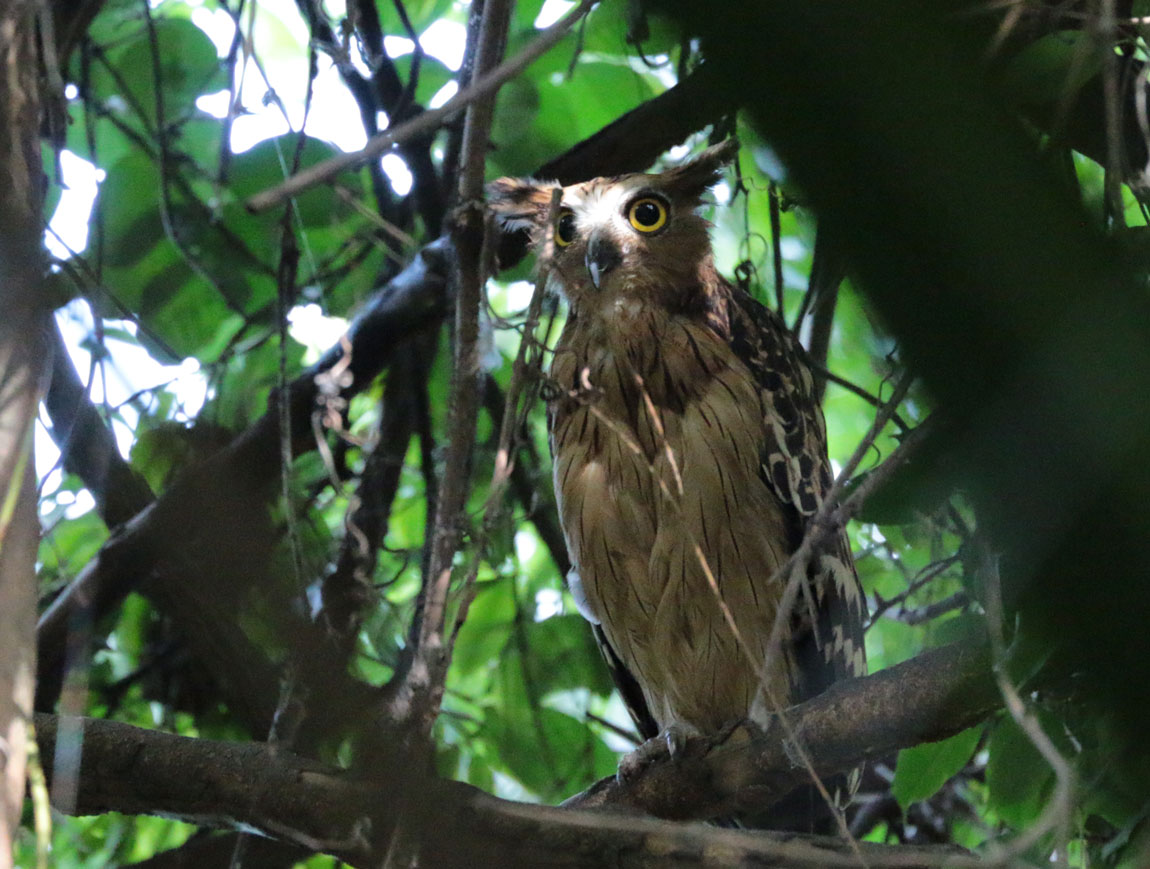 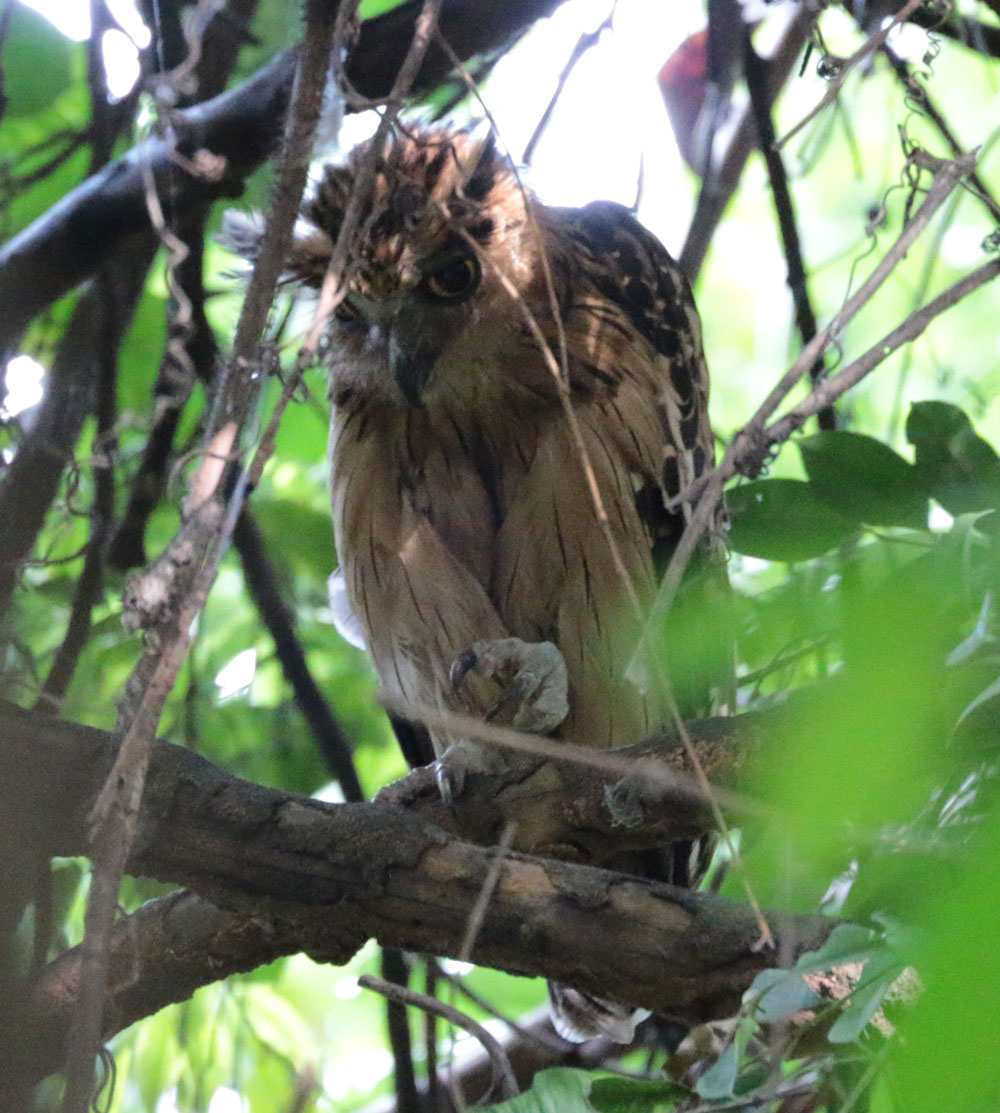 A good look at the owl’s talons

This owl is a Buffy Fish Owl!

Buffy Fish Owls are large owls (compared to the 24cm Sunda Scops Owl, this fish owl is 45cm tall!). They are brown in colour with black streaked wings and have large ear tufts as well as yellow eyes. They can be found in wooded areas near water.

Funfact: This owl and its relatives have actually lost the soft fringes that are found along the rear edges of an owl’s wings, which allow owls to fly without making a sound. This is probably because fish cannot pick up airborne sounds very well, so the Buffy Fish Owl does not need to conceal its sound as it catches the fish.

It’s so amazing we got to see these owls! In fact, the Buffy Fish Owl is the first rare bird we’ve seen! ^_^

Bird Encounters out! (or should I say… owlt 😉 )