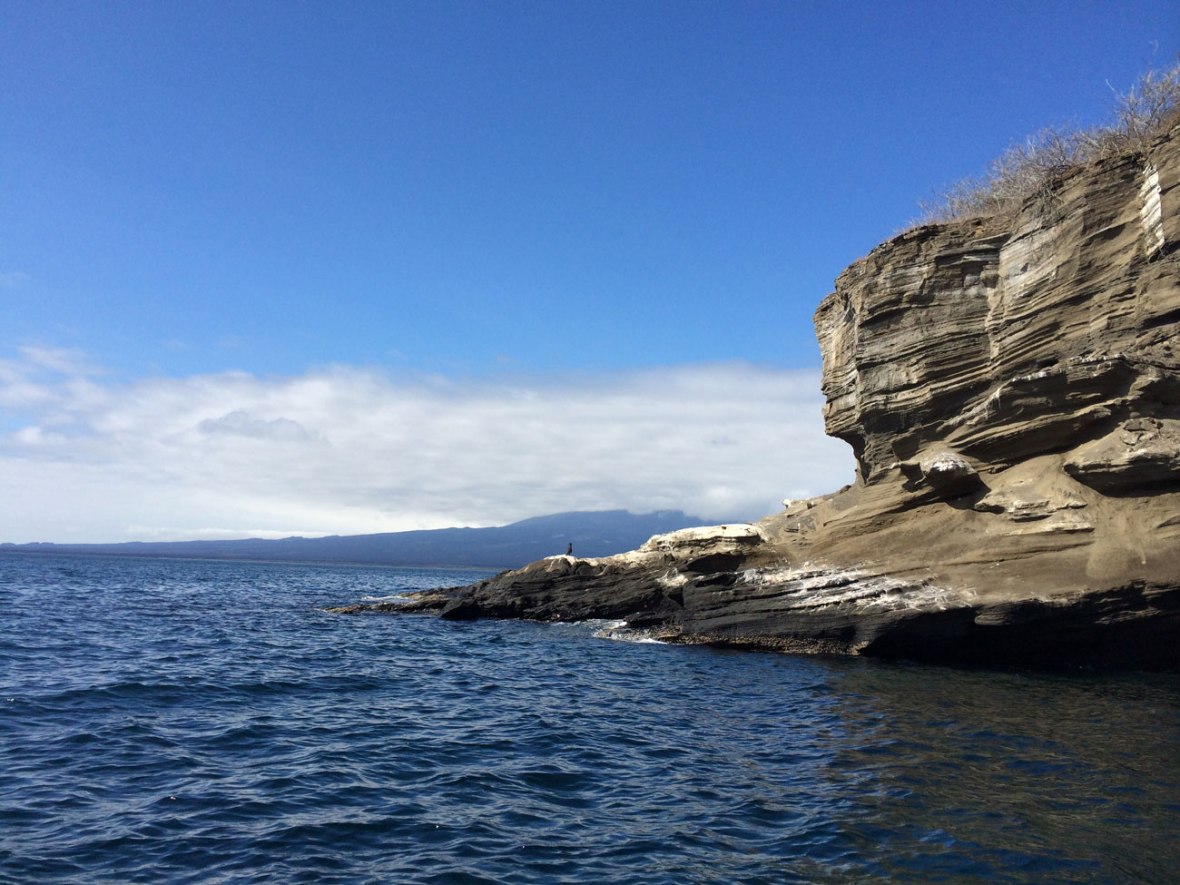 In 2013 we had the amazing opportunity to visit the Galapagos Islands! We went on a cruise to the Northern islands. Sadly, this trip was during our pre-birdwatching days (no birding cameras) so please excuse our photo quality! 😛 In fact, our blog is indirectly a result of this trip – it fuelled our interest in nature, plus we used the binoculars we got for this trip to first spot birds outside our balcony. (Read our Journey)

You may know that the Galapagos is where Darwin came up with the Theory of Evolution. Actually, they are an archipelago of volcanic islands which are part of Ecuador. They were formed through… plate tectonics (cue the geography lesson) The islands are located on the Nazca tectonic plate, which is slowly but continuously moving over the Galapagos hotspot – a stationary, unusually hot part of the Earth’s mantle. The movement of the plate over the hotspot results in large amounts of magma welling up on the surface, pushing holes through the plate to form the series of volcanoes that make up the islands. The age of the islands is actually related to their distance from the hotspot – the eastern islands like San Cristobal, furthest from the hotspot, are the oldest, while the western islands like Fernandina, closest to the hotspot, are the youngest.

How did the wildlife even get there? By air – birds flying, seeds or spores being blown by the wind, or by sea – sea lions, turtles and penguins swam their way there, reptiles or small mammals actually floated there on rafts of vegetation! :O The islands are located near the equator, making them sunny, but are also near cool ocean currents, creating a unique mix of tropical and temperate environments, which is why their animals and plants are so special.

As part of the preservation of the islands, our guides are trained to make sure that tourists follow certain rules, like staying on the designated paths and not touching any animals. This is one of the reasons why the animals don’t run/fly away from humans, because there are no major predators on the islands.

We saw so many birds here that we’re splitting them up into groups, so today’s group is boobies and gulls! Apparently, “booby” comes from Spanish “bobo”, meaning fool, probably because the birds are clumsy and unwary on land (but they are great divers!).

Blue-footed boobies (Sula nebouxii) are named after their characteristic bright blue feet! They are one of the most iconic highlights of the Galapagos. Their feathers are brown above and white below, with darker brown wings. When they walk on land they can seem clown-like and clumsy, but they are actually graceful when fishing in a flock and plunge diving. They usually feed closer to shore.

Fun fact: When mating, females tend to mate with birds with brighter blue feet! Apparently, the birds get the blue pigments from their diets, and the feet colour actually indicates their health. :O

A fluffy juvenile just sitting on the ground :3 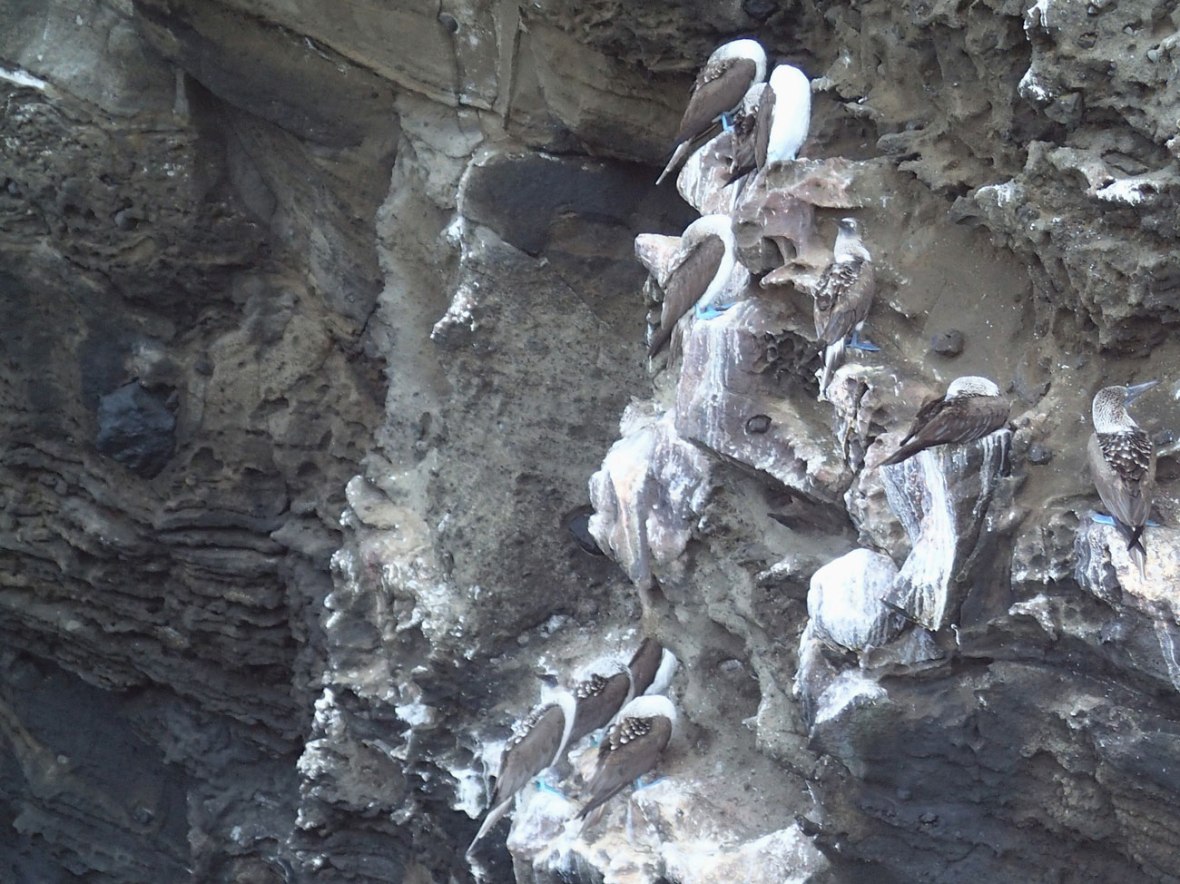 Don’t they look like they’re part of the cliff? (Or at least their guano does…)

Like the blue-footed booby, the red footed booby (Sula sula) is (obviously) named after its feet. It’s the smallest booby and feeds out in the open ocean. There are several different morphs, but in the Galapagos they are mainly brown morphs with the occasional white one. They have blue beaks, coloured pink near the base. Like other boobies, chicks are covered in lots of fluffy white down :3

Even the skin around its eyes are pale blue! :O

Nesting amongst the bare branches 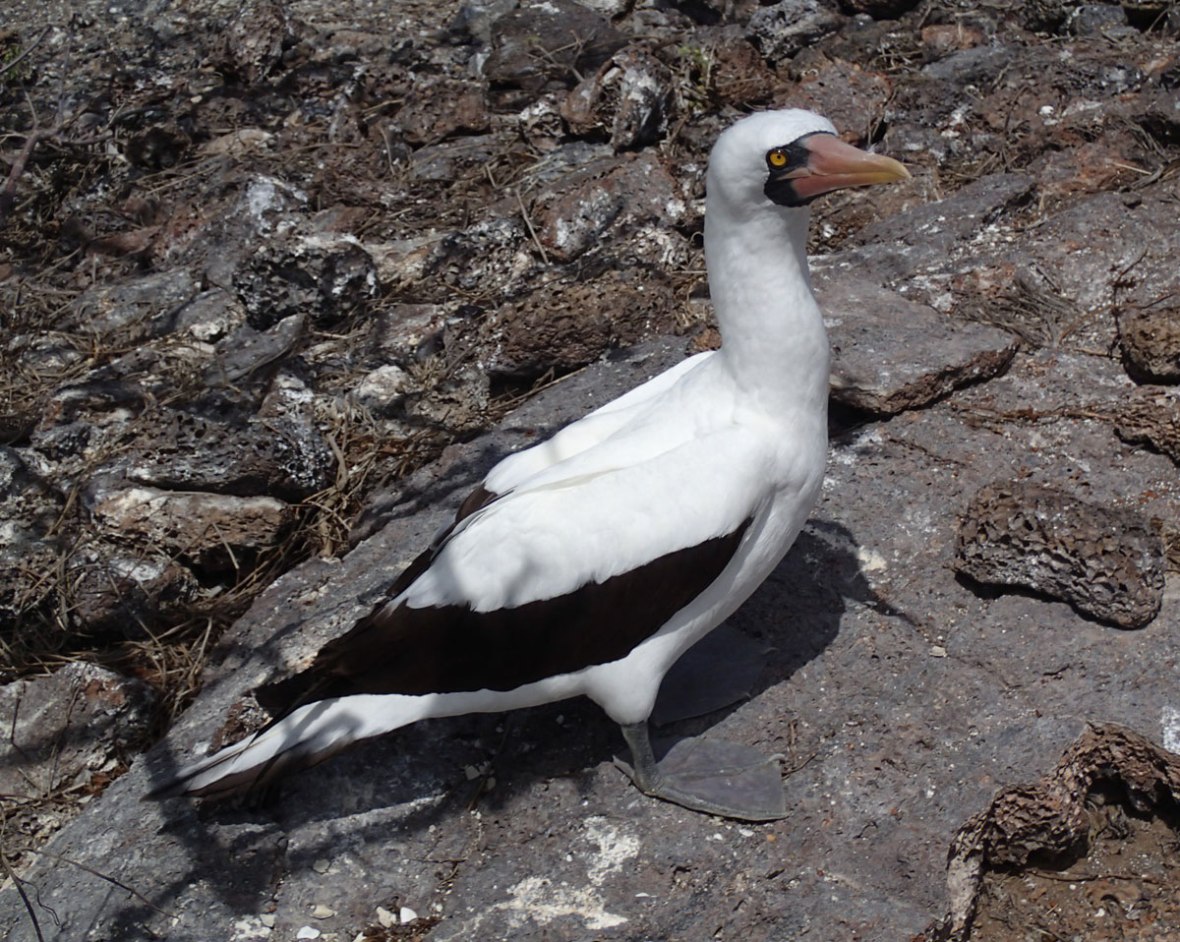 The Nazca booby (Sula granti) has a pure white head and body, with a black tail and trailing edge of the wings. It has black skin at the base of its bill, making it look masked. It actually used to be considered as a subspecies of the Masked Booby (not in Galapagos)! These birds fish further out within the islands. 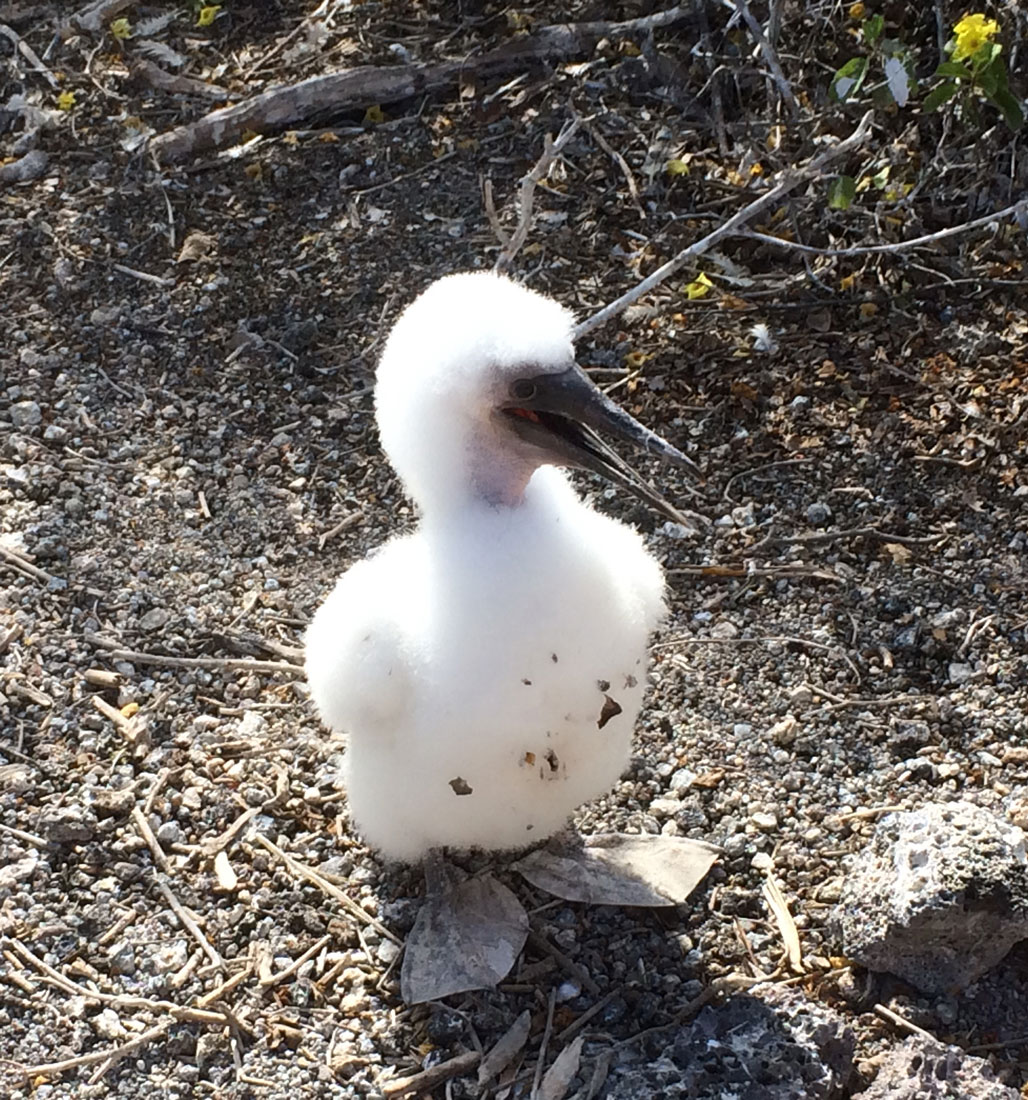 Another fluffy white booby chick! They’re not afraid of humans and we could walk right up to them :3

A pair just sitting on the lava rocks

Lava gulls (Leucophaeus fuliginosus), otherwise known as dusky gulls, get their names from their sooty black plumage, and also because they live on the lava rocks on the Galapagos islands. Their beaks and feet are black and they have white upper and lower eyebrows, making them seem like they have white rings around their eyes. Juveniles are generally dark brown all over. You can find them by their long, loud and raucous calls, made with their beaks wide open! These gulls are also quite aggressive and territorial.

Fun fact: Lava gulls are the rarest gulls in the world! They are endemic to the Galapagos and are considered “Vulnerable” by the IUCN Red List. There are less than 600 individuals in the wild 😦 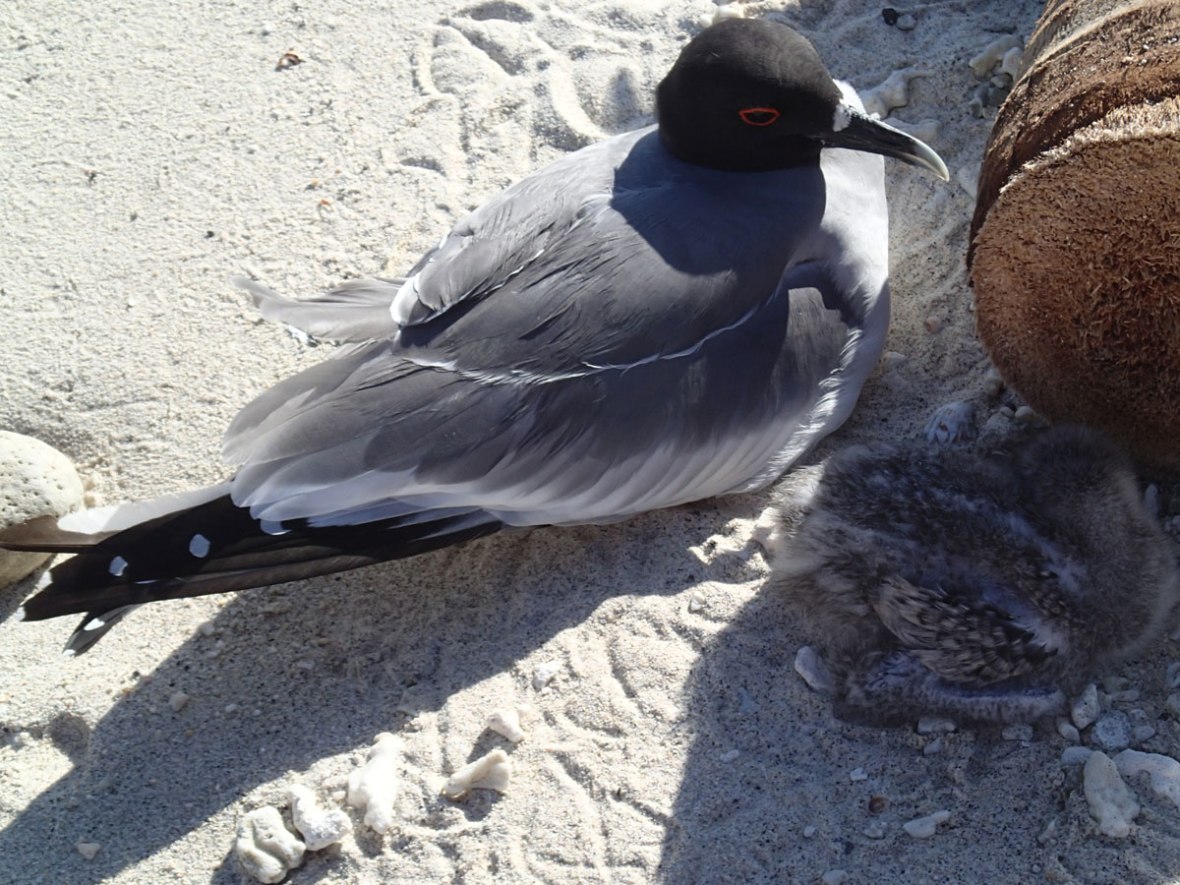 Look at the fluffy little chick in the corner!

The swallow-tailed gull (Creagrus furcatus) has white underparts, a dark grey head and a lighter grey body (in breeding plumage). Its red eyering becomes black outside breeding season. It’s the only fully nocturnal seabird in the world! :O It feeds nocturnally on fish and squid which rise to the water surface at night to eat plankton. When not breeding, it spends its time flying over the open oceans.

Fun fact: Its huge eyes are adapted to night vision! Their eyes are larger in size and volume than any other gull and have a special layer of tissue in the back of the eye that helps increase light available for vision :O

On the beach, we spotted one gull feeding its chick!

Look out for the next installment about our Galapagos birds around Christmas time! 😉